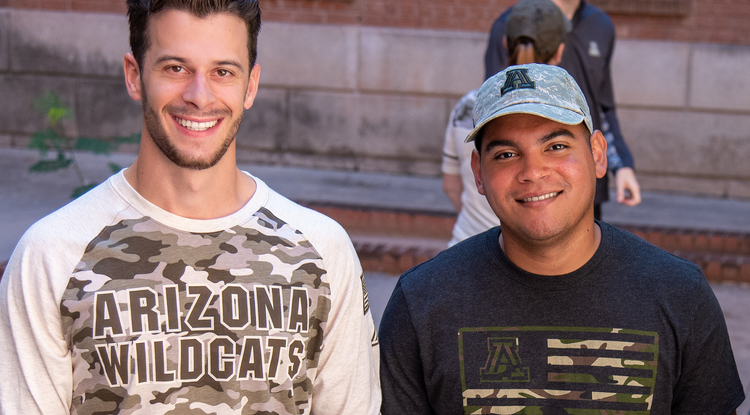 For the second year, the University of Arizona is partnering with Operation Hat Trick, which has donated more than $1.3 million to select organizations including the Fisher House in Tucson.
Andy Ober
,
University Communications
Nov. 4, 2019
Resources for the Media

Operation Hat Trick partnered with UArizona and its Veterans Education and Transition Services on a photo shoot with the student veterans to promote the limited-edition merchandise branded with the logos of both organizations. A portion of the proceeds from the sale of those products will go to support military service members and veterans at the Fisher House in Tucson.

“It is very important that I do whatever I can to help and support other veterans because they are family to me,” said Manny Alberto Matias, a U.S. Air Force veteran and pre-business student at UArizona. “I know what it is like to be afraid and nervous about the future and how terrifying it can be to ask for help. That is why I – and countless others here at the VETS Center – do what we do, to improve the quality of life for our brothers and sisters in arms.”

This is the second year the University of Arizona logo will be featured on camouflage hats, shirts and other gear in support of wounded veterans in the Tucson area.

The University of Arizona raised $3,500 through the effort last year and earned the Operation Hat Trick Excellence in Service Award, resulting in an extra donation of $11,000 to the Fisher House, which provides homes where military and veteran families can stay free of charge while a loved one is in the hospital.

“It’s been humbling to work with the Arizona Fisher House and hear the stories of these veterans and their families,” said UArizona Director of Trademarks and Licensing Alixe Holcomb. “As a university, we are proud to support our local veterans and active duty service men and women. We are determined every year to make this a program that our community can count on and wants to support.”

Operation Hat Trick was founded in 2008 in New Hampshire by Dot Sheehan and launched nationally in 2012. The organization’s mission is to support the recovery of wounded service members and veterans through merchandise sales.

“When I think about helping veterans, I think about my younger brother who is currently deployed,” added John Krause, a U.S. Army veteran and junior in the Eller College of Management. “Supporting veterans is of importance to me because it allows me to continue serving while not in uniform.”