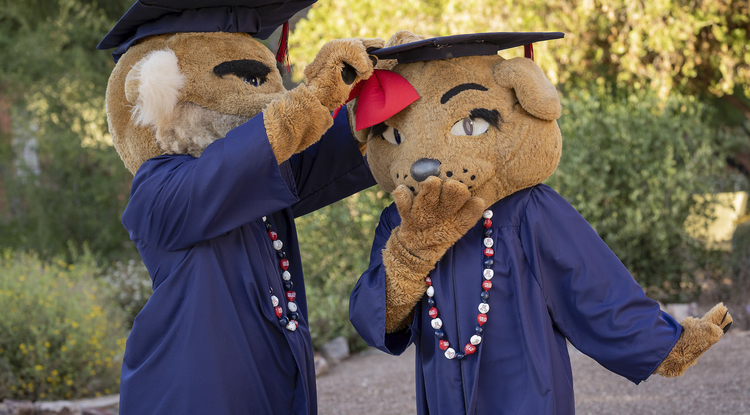 The university's 156th Commencement – its first-ever virtual ceremony – will begin at 6 p.m. on Friday and will be streamed on the Commencement website. (Photo: Chris Richards/Arizona Alumni Association)

The interactive, virtual Commencement ceremony was guided by input from graduating students and will run similarly to an in-person ceremony.
Kyle Mittan
,
University Communications
May 12, 2020
Resources for the Media
Extra Info: 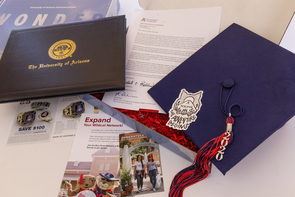 In preparation for the virtual ceremony, thousands of graduates opted to receive kits that included mortarboards, tassels and a diploma cover or a notepad and pen, along with a note from the president and provost congratulating graduates on their accomplishments. (Photo: Chris Richards/Arizona Alumni Association)

University of Arizona President Robert C. Robbins will confer more than 11,000 bachelor's, master's, doctoral and professional degrees during the university's first-ever virtual Commencement ceremony. Degrees recipients will include those who completed their studies in fall and winter 2019 and spring 2020, as well as those who will finish this summer.

The university's 156th Commencement will begin at 6 p.m. on Friday and will be streamed via YouTube. Anyone can attend by visiting the Commencement website; no registration is required.

Robbins announced in late March that this year's Commencement and convocations could not take place in person due to physical distancing precautions amid the COVID-19 pandemic. The virtual format, which will include a pre-show, several speakers and the conferral of degrees, was guided by input submitted online by graduating students.

An in-person ceremony is planned during Homecoming Weekend on Oct. 30.

Heather Lukach, assistant vice president of presidential events and university ceremonies, said converting the university's biggest event of the year into a virtual experience with just over two months' notice was not easy.

"But because of our team and because of the people who came together and our students' input, we're able to move forward with these plans," Lukach said. "That's our motto for this ceremony: Move forward. We couldn't do that if it weren't for everybody who wanted to make it happen."

In preparation for the virtual event, graduation "kits" were mailed to more than 2,800 undergraduates and more than 1,000 graduate and professional students who opted to receive them. The kits contain graduation items including mortarboards, tassels and a diploma cover or a notepad and pen, along with a note from the president and provost congratulating graduates.

The kits were assembled and mailed by staff in Presidential Events and University Ceremonies, Facilities Management, Procurement and Contracting Services, Financial Services and the Office of the Secretary. Facilities Management provided personal protective equipment for workers to assemble the kits at the university's Paul and Alice Baker Distribution Center, where they had enough space to physically distance.

The virtual Commencement ceremony will run in much the same way as the in-person event, but with added broadcast elements suited for viewing online. It will begin with opening remarks from Robbins, and those tuning in will also hear from Sydney Hess, student body president of the Associated Students of the University of Arizona, and Marie Teemant, president of the Graduate and Professional Student Council. Kendal Washington White, dean of students and vice provost for campus life, and Provost Liesel Folks will present a special recognition for this year's seven outstanding seniors.

UArizona alumna Alison Levine, a history-making explorer and mountaineer, will deliver the ceremony's keynote address. Levine, who earned her bachelor's degree from UArizona in 1987, has climbed the highest peak on every continent and has skied to both the North and South poles. She has also worked for several Fortune 500 companies and served as deputy finance director for Arnold Schwarzenegger when he was governor of California.

Following Levine's address, the college deans will present their candidates as groups to Robbins just as they would do in the stadium. Melinda Burke, vice president of alumni relations and president of the Arizona Alumni Association, will address attendees before final remarks from Robbins.

Levine and four others will receive honorary Doctor of Humane Letters degree, which will be conferred at the in-person ceremony in the fall. The other honorary degree recipients are Bruce and Patricia Bartlett, benefactors and champions of the university's Strategic Alternative Learning Techniques Center; Melody S. Robidoux, a businesswoman, philanthropist and UArizona alumna who co-founded the Women's Foundation of Southern Arizona; and Linda Ronstadt, a 10-time Grammy Award-winning singer, Rock and Roll Hall of Fame inductee and Tucson native.

A virtual pre-show at 5:30 p.m., with moderated Zoom rooms just for graduates, will allow participants to interact with one another before the ceremony begins at 6 p.m.