At the time of the 1985 theft, the de Kooning painting was centered on the wall between Karel Appel (left) and Hans Hofmann paintings. The guard discovered the empty frame as the thieves were pulling out of the parking lot. (Photo illustration by Emily Litvack and Bob Demers/UANews)

The UA's Unsolved Case of the Stolen Painting

Thirty years after it was taken from the UA Museum of Art, the Willem de Kooning painting "Woman-Ochre" remains missing. It would be worth as much as $160 million today.
Emily Litvack
,
University Relations - Communications
Nov. 18, 2015
Resources for the Media
Extra Info:

If you have any information regarding the missing de Kooning painting, call: 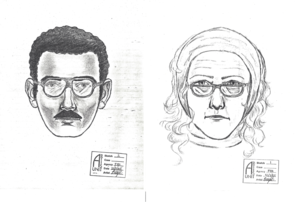 A Dec. 6, 1985, edition of the Arizona Daily Star included this sketch of the suspects. They were described as a woman in her mid-50s with shoulder-length reddish-blond hair, wearing tan bell-bottom slacks, a scarf on her head and a red coat, and a man with olive-colored skin, wearing a blue coat. Both had thick-framed glasses. 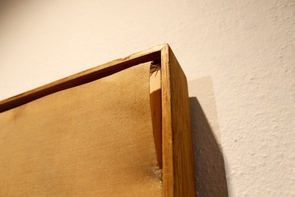 On Friday, Nov. 29, 1985, the day after Thanksgiving, a coveted painting was stolen from the University of Arizona Museum of Art.

The painting was "Woman-Ochre," one of six Willem de Kooning paintings in a series exploring the figure of a woman. "Woman III," another in the series, sold in 2006 for $137.5 million — at the time, the second-most expensive painting ever sold.

The story of the theft of "Woman-Ochre," full of intrigue though sparse in detail, continues to haunt museum staff even after the passing of 30 years.

At approximately 9 a.m., a security officer opened the front door of the museum to let a staff member into the lobby. Two visitors — a man and a woman — followed inside.

The man wandered up to the second floor while the woman engaged in small talk with a security guard. The man spent a little less than 10 minutes on the second floor, cutting "Woman-Ochre" out of its wood frame with a sharp blade. Leaving remnants of the painting's canvas edges behind, the man slipped the painting under a garment, walked back down the stairs and reunited with his partner.

The two hurried out of the museum, hopped into a rust-colored sports car and never returned. The heist took no more than 15 minutes.

Meanwhile, the guard, suspicious only because of the hasty nature of the visitors' exit, walked up the stairs to find the empty frame. He ran downstairs, but it was too late. The visitors — described as a woman in her mid-50s with shoulder-length reddish-blond hair, wearing tan bell-bottom slacks, a scarf on her head and a red coat, and a man with olive-colored skin, wearing a blue coat — were gone.

Federal Bureau of Investigation Special Agent Meridith Savona is assigned to the case, as one of 16 special agents throughout the country on the FBI's 10-year-old Art Crime Team.

About 80 percent of U.S. museum thefts reported to the National Stolen Art File are committed internally, by staff or those in a position of trust. Moreover, the works are stolen most often from collection storage areas rather than exhibitions. For these reasons, Savona explained, the case of the stolen de Kooning is out of the ordinary.

"A former boss of mine told me once that, in this business, if something you are responsible for is broken, lost or stolen, it feels like a death," Schmidt said. "Of course, we don't put the value of the objects in the collection on the same level as the value of a human being's life, but the process is the same: shock, grief, loss.

The state of Arizona paid a little more than $400,000 to the museum when the insurance claim was settled in the 1980s. Because there were no comparable de Kooning paintings available at that price to replace "Woman-Ochre," the museum put the money toward its security budget.

"Still, the painting's loss affects us, haunts us, in every decision we make about the safety of the collection," Schmidt said.

If the painting, originally donated to the museum by Edward J. Gallagher, were one day recovered, UAMA would pay back the $400,000 to the state to have "Woman-Ochre" returned to its collection.

The piece would be one of the most valuable in the museum's collection today, worth between $100 million and $160 million.

Hope of a Recovery

According to Schmidt, there is hope yet for the return of de Kooning's work.

Usually, a stolen painting gets returned to a collection in one of two ways. The thief may try to sell the piece shortly after the heist and get caught. This often takes only a few years. But if the thief has kept the painting, he or she eventually dies, and the surviving family finds the painting and tries to sell it. The painting is returned — but the process can take decades.

If and when the stolen de Kooning painting is restored to UAMA's collection, both Schmidt and Olivia Miller, the museum's curator, agree that staff would attempt to place it back in its original frame.

"At the museum, we believe art is essential to our daily lives — it's in our mission," Schmidt said. "Art is everywhere and comes in many forms. Therefore, crime involving art also affects our lives, often in ways we are not aware."