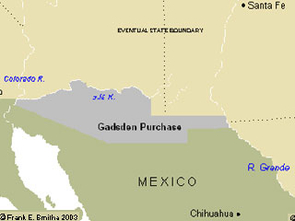 Internationally renowned scholars from the United States, Canada and Mexico, including local author Tom Sheridan, will address the history and consequences of the 1853 Gadsden Purchase during a two-day conference.

The Gadsden Purchase, completed 150 years ago, resulted in the incorporation of Tucson, southern Arizona, and southern New Mexico into the United States, "suddenly, with the stroke of a pen," writes Sheridan.

Juan Garcia, head of the UA's history department, says the treaty triggered an ongoing identity debate among Tucsonans of the time. "I think any time you create an artificial boundary you put people in a situation where they're forced to look at their own cultural identity and whom they identify with. Tucson has been unique in that there has been a real effort to maintain and blend the original culture that was here. In some ways Tucson reflects a better inter-mingling of different groups than other communities have been able to achieve," he says.

Featured speakers include Josefina Zoraida Vázquez y Vera of the Colegio de México, Mark Gilderhus of Texas Christian University, and Christon Archer of the University of Calgary. Information including the program and abstracts of presentations can be found online, www.u.arizona.edu/~mrankin/gadsdenpurchase.html.