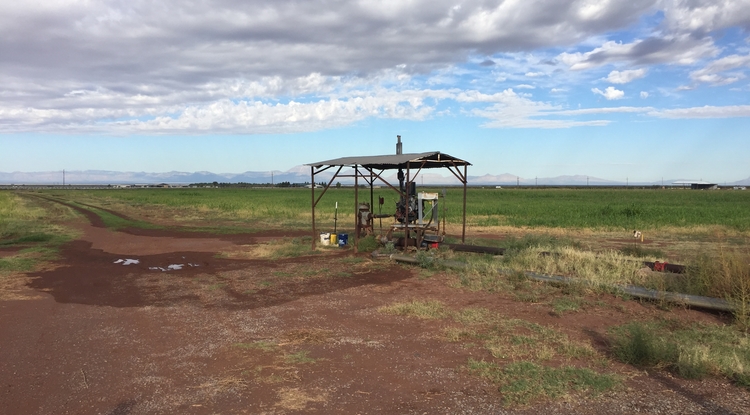 Drilling deeper wells may not be a good long-term solution to compensate for increasing demands on groundwater, report UA hydrologist Jennifer McIntosh and colleagues.
Mari N. Jensen
,
UA College of Science
Nov. 28, 2018
Resources for the Media

The U.S. groundwater supply is smaller than originally thought, according to a new research study that includes a University of Arizona hydrologist.

The study provides important insights into the depths of underground fresh and brackish water in some of the most prominent sedimentary basins across the U.S.

"We found that potable groundwater supplies in the U.S. do not go as deep as previously reported, meaning there is less groundwater for human and agricultural uses," said Jennifer McIntosh, a University of Arizona Distinguished Scholar and professor of hydrology and atmospheric sciences.

Drilling deeper wells may not be a good long-term solution to compensate for increasing demands on groundwater.

"We show that there is potential for contamination of deep fresh and brackish water in areas where the oil and gas industry injects wastewaters into – or in close depth proximity to – these aquifers," McIntosh said. "These potable water supplies are already being used up from the 'bottom up' by oil and gas activities.

Many rural areas in Arizona and other parts of the U.S. rely exclusively on groundwater for both agricultural and domestic use, she said.

To find out how deep potable groundwater extends, the scientists analyzed water chemistry data from the U.S. Geological Survey for 28 key sedimentary basins in the U.S. and looked at the correlation between water well depths and the depth to the transition between fresh and brackish water.

In parts of the western U.S. known to geologists as the Basin and Range Province, fresh groundwater extends down an average of 3,400 feet, McIntosh said. The province includes Nevada, southern Arizona and New Mexico, and extends into parts of California, Utah, Oregon and Idaho.

The new research found the average depth of transition from fresh to brackish groundwater in the U.S. overall is about 1,800 feet, which contradicts previous studies suggesting that fresh groundwater extends down to 6,500 feet.

Especially in parts of the eastern U.S., the team found the transition from fresh to brackish water occurs at less than 1,000 feet. In such regions, drilling deeper wells is not a long-term solution to the need for additional fresh water, the team wrote.

"There are a number of cases where potentially you could go a kilometer or so deep for fresh groundwater, but there are other areas of the United States where in maybe a maximum of 200 or 300 meters you would run into saline groundwater – essentially you would be done in terms of water resources," said Ferguson, an associate professor at the University of Saskatchewan in Saskatoon, Canada.

Co-author Debra Perrone, assistant professor of environmental studies at the University of California, Santa Barbara, said, "In some basins, injection wells are installed shallower than the transition from fresh to brackish water."

Addressing how much separation between groundwater resources and oil and gas activities is needed to protect groundwater will require additional research, the team writes.

Based on their findings for the U.S., the authors suggest the amount of fresh groundwater available globally may also be less than previously thought. They note that an estimated more than five billion people live in water-scarce areas, many of which rely on groundwater and where, in some cases, significantly more water has been taken out of a groundwater basin than is coming in.

The authors studied the U.S. because the needed data was more readily available than in Canada or other countries.

The research paper by Ferguson, McIntosh, Perrone and Scott Jasechko of the University of California, Santa Barbara, "Competition for shrinking window of low salinity groundwater," is available here: http://iopscience.iop.org/article/10.1088/1748-9326/aae6d8/meta