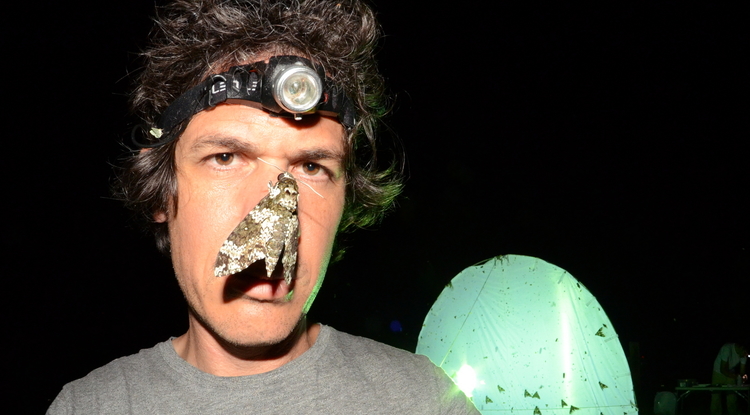 The lead author of the study, Eran Levin, gets up close and personal with a moth (Manduca rustica) during nocturnal field work in the Catalina Mountains near Tucson, Arizona. (Photo by Eran Levin)

The Value of Nutrition and Exercise, According to a Moth

How can animals that feed mostly on sugar embark on migrations spanning continents? What looked like flawed scientific data led to an unexpected discovery, thanks to the tenacity of a group of biologists in the UA's Department of Entomology.
Daniel Stolte
,
University Communications
Feb. 22, 2017
Resources for the Media

An adult Manduca sexta moth hovers in front of a flower while drinking nectar at night. (Photo courtesy of National Science Foundation) 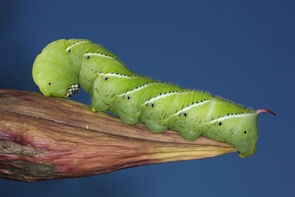 Here's a clue: If you take a walk in the desert on a moonlit night, you might see them, darting from flower to flower and hovering in midair: moths of the hawkmoth family (Sphingidae).

Nectar-feeding moths, pollinating bats and hummingbirds are masters in sustaining the most intense exercise of all animals. To extract nectar from a flower, they must hover in front of the flower before darting off to the next one. But how can these organisms perform such feats on a diet that's mostly sugar?

New research by University of Arizona biologists not only offers an explanation, but also suggests that these animals stay healthy not despite, but because of, their sugary diet.

Oxygen, while necessary for life to exist, is a double-edged sword. The more we engage in intense aerobic exercise, such as hovering, the more oxygen reveals its ugly side in the form of reactive oxygen species — small reactive molecules that wreak havoc on cells.

Researchers in the lab of Goggy Davidowitz in the Department of Entomology in the UA's College of Agriculture and Life Sciences discovered that hawkmoths (also known as Manduca moths) have evolved a strategy that helps them minimize the muscle damage inflicted by the oxidative stress generated during sustained flight. The results are published in the journal Science.

"If you wanted to consume the equivalent amount of sugar that a moth takes up in one meal, you'd have to drink 80 cans of soda," says Eran Levin, who led the research as a postdoctoral fellow in Davidowitz's group. "It's amazing that an animal can process such an amount of sugar in such a short time."

Nectar-feeding moths and hummingbirds don't take up any antioxidants with their diet, which begs the question of how they deal with the oxidative damage their muscles are suffering during the moths' nightly foraging flights.

Two sophisticated pieces of equipment set up to work in tandem made it possible to study in great detail the metabolism of Manduca moths during sustained flight. The team found that the insects actually use the sugar in their diet to make their own antioxidants. They accomplish this by shunting the carbohydrates they consume to a metabolic pathway that evolved early on in the evolution of life: the pentose phosphate pathway.

Humans, too, have this pathway, but it cannot, on its own, produce all the antioxidants needed, which is why athletes drink antioxidant-laced sports drinks and parents tell their children to eat their veggies. Fitting this pattern, migrating birds often are observed eating berries and fruit — both rich in antioxidants — during stopovers.

"Manduca is a well-suited model system to study this metabolic pathway, which is the same for bacteria and sequoia trees," Levin explains. "If we understand how the moth is doing it, you can find out how we do it. And we can learn about what goes wrong with our sugar consumption."

During the flight experiments, the researchers noticed something strange: The measurements tracking how much oxygen the moths consumed and how much carbon dioxide they produced didn't add up.

"If you burn all the sugar you're eating, you expect the same ratio of carbon dioxide exhaled to oxygen consumed," Levin says. "This is normal when you feed on carbohydrates, but we obtained results that shouldn't have been possible according to the scientific literature."

Reluctant to trust the data their moths were generating, Davidowitz contacted the manufacturer of the flight measurement apparatus. The CEO of the company came out, and after much troubleshooting, tinkering and adjusting, the readings still did not change.

One day, a colleague suggested flying a bumblebee in place of a moth, because bumblebees are known to burn only carbohydrates during flight. Sure enough, the machine spat out the expected values.

"That told us our data were correct," Levin says. "They indicated that 40 percent of the carbon in our moth flight experiments had to come from something other than carbohydrates, so we looked for an explanation, and the only such pathway that would produce those results is the pentose phosphate pathway."

While flying, it turned out the moths were not only burning carbohydrates, but fat as well. As soon as they rested, within seconds, they shunted their metabolism to the pentose phosphate pathway.

In addition to solving the issue of the higher-than-what-theory-allows measurements, the results provided the answer to the mystery of how a nectar-feeding organism avoids killing itself from oxidative stress.

"On our flight apparatus, moths fly about three miles a night on average," Davidowitz says. "We don't know how much they are actually flying in the wild."

"We think the tissue repair occurs when they rest, but we haven't measured that," Davidowitz says.

If You Rest, You Rust

Moths that were frequent and intense flyers were found to have less oxidative cell damage than those that did not, which seemed counterintuitive, Levin says.

"There is this common notion out there where we tend to think that all animals that feed on sugar are very active and fast-living creatures," he says. "But our experiments suggest that this is actually not the case. In fact, there is much more energy to be gained by burning fats, so we suggest these high-performing animals consume a sugar-heavy diet to protect their muscles from damage."

Levin says he thinks the principles observed in Manduca moths apply to all animals, as similar respiratory values have been measured in marsupials, mammals and birds.

"But because they seemed to contradict theory, those measurements usually didn't make it into the paper, or they were ascribed to lipid synthesis," Levin says.

Adds Davidowitz: "We think the ability to shunt glucose through an ancient metabolic pathway has allowed animals that only feed on nectar to embark on long migrations, such as monarch butterflies, hummingbirds and bats.”

The co-authors on the paper are Giancarlo López-Martinez at New Mexico State University in Las Cruces, New Mexico, and Bentley Fane, in the UA School of Plant Sciences and the UA's BIO5 Institute. Funding was provided by National Science Foundation grant IOS-1053318.