The composition of the desert's spring wildflower display is changing, according to research from the UA's Desert Laboratory at Tumamoc Hill.
Mari N. Jensen
,
College of Science
Dec. 16, 2009
Resources for the Media 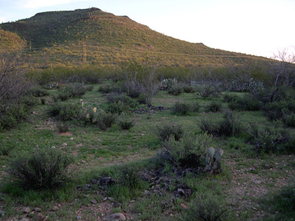 (Click to enlarge) Researchers from Larry Venable's lab at the University of Arizona have been studying how climate affects the growth of winter annuals since 1982. This picture shows part of the study site, which is at Tumamoc Hill in Tucson, home of the UA's Desert Laboratory. (Credit: Copyright 2005 Kathy Gerst)
(Click to enlarge) Ecologists Sarah Kimball (L) and Amy Angert (on the right behind a creosote bush) count seedlings of winter annual plants at a study site located at Tumamoc Hill, home of the University of Arizona's Desert Laboratory. (Credit: Copyright 2007 Jonathan L. Horst)

Global warming is giving a boost to Sonoran Desert plants that have an edge during cold weather, according to new research from the University of Arizona in Tucson.

Although the overall numbers of winter annuals has declined since 1982, species that germinate and grow better at low temperatures are becoming more common.

"It's an unexpected result – that global warming has led to an increase in cold-adapted species," said lead author Sarah Kimball, a research associate in UA's department of ecology and evolutionary biology. "Because the winter rains are arriving later, they are occurring under colder temperatures."

Climate change is shifting the winter storm track so the Sonoran Desert's winter rains now generally begin in late November or early December, rather than during the balmy days of late October.

Therefore seeds that require winter rains must sprout during the cooler days of December.

"Southern Arizona has been getting hotter and drier for the last 25 or 30 years, and as a result, the desert annuals we've been studying at Tumamoc Hill have been changing," said co-author D. Lawrence Venable, the UA's director of research at Tumamoc Hill.

The researchers focused on the nine most abundant species, which comprise 74 percent of all winter annuals found at the study area.

The species of winter desert annuals studied are ones Venable calls "the bread and butter flowers that you see everywhere." Some are called "belly flowers" because they are best seen close up, in contrast to the less common, showy desert annuals like poppies and lupines.

The findings are part of a long-term study of winter annuals that Venable, a UA professor of ecology and evolutionary biology, initiated at the UA's Desert Laboratory on Tumamoc Hill in 1982.

Kimball, Venable and their colleagues are publishing their paper, "Contemporary Climate Change in the Sonoran Desert Favors Cold-Adapted Species," in an upcoming issue of the journal Global Change Biology. Amy Angert, now at Colorado State University in Fort Collins, Colo., and Travis Huxman of the UA also are co-authors. The National Science Foundation and the Philecology Foundation of Fort Worth, Texas, funded the research.

In 1982, Venable began intensive research into the growth of desert annuals in relation to climate by setting up permanent study plots at Tumamoc Hill.

His research team has been continually monitoring the germination, survival and seed production of the winter annuals ever since. The weather station on Tumamoc Hill provides records of local temperatures and precipitation.

Venable now has 72 plots and a team of people to study each plant's life. Team members start collecting the data 10 days after the first winter rain and after every subsequent rain. Even when there are no subsequent rain events, the team still collects the data monthly.

For each plot, a clear sheet of stiff plastic serves as the year's record of the plants' location and life history.

On each visit, a researcher places the plastic sheet on a frame 3 inches above the plot and uses a permanent marker to record the location of each germinating plant on the plastic sheet. As the season progresses, each plant's survival and seed production is marked on the same sheet.

To make sure even the littlest plant is not overlooked, the researchers must hunch over the plot and its plastic sheet.

"We use knee pads, for sure," Kimball said.

In 2007, Kimball reviewed the data and realized that the temperature at which germination occurred had declined steadily since 1982. However, some species had not done as badly as others and she wondered why.

So she turned to Venable's long-term data set to see which aspect of the plants' growth was responsible for the change. She wanted to know whether some species were germinating better or grew better or just made more seeds.

In a previous study, Venable and his colleagues had examined the physiology of the nine species and found that some grow better under cold conditions and are more efficient at using water. Those species are now becoming more common as the changing climate shifts the onset of the winter rains.

"The physiological component was the 'Ah Ha!' thing," Venable said. "The more water-use-efficient species are more adapted for growing under cold conditions."

Some cold-adapted winter annuals that are becoming more common are popcorn flower, or Pectocarya recurvata, and Erodium cicutarium, known more commonly as red filaree or storksbill.

In contrast, species that germinate better when it is warm, such as wooly sunflower, known to scientists as Eriophyllum lanosum, and a species of plantain, Plantago insularis, are becoming less common.

"Even though overall the winter growing season is getting warmer, what's important in this system is that the growing season is initiated at a later date under colder temperatures," Kimball said. "This demonstrates that the response of organisms to climate change can be unexpected."