Why Russians Think Americans Don't Own Their Homes

UA sociologist Jane Zavisca says the two countries are polar opposites when it comes to mortgage financing.
Jeff Harrison
,
University Communications
May 18, 2011
Resources for the Media 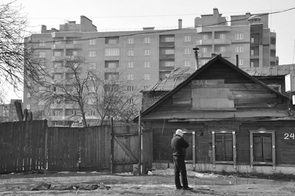 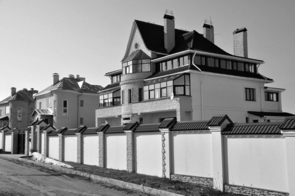 An example of housing built after the 1991 collapse of the Soviet Union. Since mortgages are anathema to many Russians, new housing in Russia is generally built for the well-to-do who have cash to pay up front for construction.

When the Soviet Union disintegrated in 1991, one of the structural problems the new government and free-market economy had to deal with was housing. Most Russians lived in government-owned apartments that had been built beginning in the late 1950s. The question then became, who owned all of that Soviet-era housing?

In her new book, "Housing the New Russia," due to be published by Cornell University Press, Jane Zavisca said the new Russian government dealt with it by announcing that this huge stock of apartments was, as of 1992, privately owned.

"Wherever you were, that's what you got," said Zavisca, an assistant professor of sociology at the University of Arizona.

It was a hugely popular move because it instantly created wealth. But it also created problems, she said. If you shared an apartment with six other people, you owned one-seventh of it. And if you wanted a nicer place with more room, a better view, or to be closer to work and shopping, unless you had ready cash, you would need a mortgage.

The new government tried to create a housing market by replicating the American housing system, essentially using the Federal National Mortgage Association, or Fannie Mae, as a template to encourage Russians to take out mortgage loans.

"This was all designed by USAID, one of their biggest foreign aid programs ever," Zavisca said. "It was an American model of what a housing market is: home ownership and securitized mortgages."

Supposedly all of that privatized housing and wealth would spur the natural development of a housing market. Those who felt they had more housing than they needed would look to trade down and use the leftover money for other things. The private sector would emerge to produce housing for those who had been left out.

Housing construction declined by 70 percent from 1992 to 2002, the first decade after the Soviet era. The construction industry in Russia has evolved to cater to wealthy and well-to-do middle class clients who could pay with cash, but there is a lack of trust by both contractors and consumers. No one wants to pay up front and wait, or deal with credit.

Most Russians also have to deal with the fact that they cannot afford mortgages, since housing prices are very high relative to incomes and interest rates stand at about 12 percent. And most of them say they wouldn't want a mortgage even if they could qualify for one.

Unlike Americans who for decades have willingly taken on 30-year mortgages to buy housing, Russians have largely balked at the notion. Even when young families were offered a $10,000 credit, roughly a year's wages and the equivalent of $60,000 in the U.S., toward the down payment for a house, Zavisca said there was little interest.

"Few Russians are willing to take out mortgages because the risk of foreclosure is unacceptable, and because they view interest payments – which they call overpayments – as unfair. As one Russian put it: ‘To enter into a mortgage is to become a slave for 30 years, with the bank as your master.'"

That hasn't stopped Russians from going into debt, though. They may be averse to mortgages but they love credit cards, small consumer loans and point-of-purchase store credit.

"In my interviews, people there often compared credit card debt favorably to mortgages, the inverse of here in the U.S., where mortgages are viewed as virtuous and responsible.

"Russia is completely the opposite. It may be a legacy of Soviet entitlement to housing, where housing is viewed as a right to them. Even thought the Soviet government owned the housing, people thought of it as their own and had the right to pass it down to their children, or swap with someone who wanted to trade with you.

"It was a kind of quasi-marketplace. It just wasn't financialized."

She said Russians find it odd that Americans call themselves "homeowners" from the day they close on a mortgage loan. For Russians, ownership only begins after all debts are paid off.

Zavisca said she is planning a follow-up study on mortgages in the U.S. to learn how Americans equate owing with owning, and how "home ownership" has become Americans' metaphor for a mortgage.