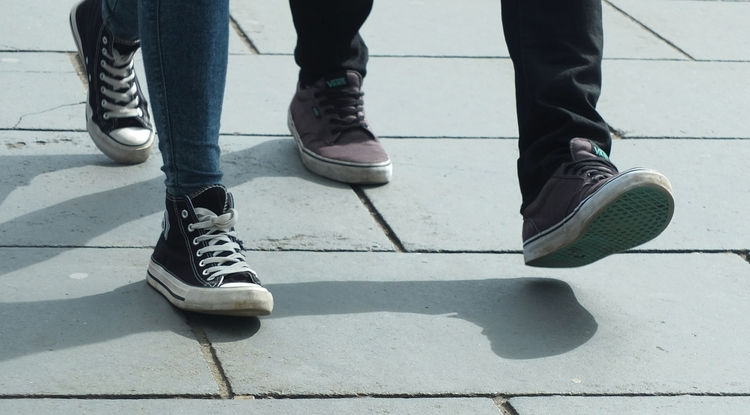 While many animals walk on the balls of their feet, humans seem locked into a heel-first stride.

Why We Walk on Our Heels Instead of Our Toes 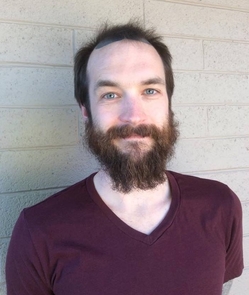 James Webber
Researchers examined differences between heel-first and toe-first walking in the UA's Evolutionary Biomechanics Lab. (Image courtesy of James Webber)
When you think of walking humans as moving like an inverted pendulum, the pivot point for the pendulum essentially occurs beneath the ground.

James Webber took up barefoot running 12 years ago. He needed to find a new passion after deciding his planned career in computer-aided drafting wasn't a good fit. Eventually, his shoeless feet led him to the University of Arizona, where he enrolled as a doctoral student in the School of Anthropology.

Webber was interested in studying the mechanics of running, but as the saying goes, one must learn to walk before they can run, and that — so to speak — is what Webber has been doing in his research.

His most recent study on walking, published in the Journal of Experimental Biology, specifically explores why humans walk with a heel-to-toe stride, while many other animals — such as dogs and cats — get around on the balls of their feet.

It was an especially interesting question from Webber's perspective, because those who do barefoot running, or "natural running," land on the middle or balls of their feet instead of the heels when they run — a stride that would feel unnatural when walking.

Indeed, humans are pretty set in our ways with how we walk, but our heel-first style could be considered somewhat curious.

"Humans are very efficient walkers, and a key component of being an efficient walker in all kind of mammals is having long legs," Webber said. "Cats and dogs are up on the balls of their feet, with their heel elevated up in the air, so they've adapted to have a longer leg, but humans have done something different. We've dropped our heels down on the ground, which physically makes our legs shorter than they could be if were up on our toes, and this was a conundrum to us (scientists)."

Webber's study, however, offers an explanation for why our heel-strike stride works so well, and it still comes down to limb length: Heel-first walking creates longer "virtual legs," he says.

When humans walk, Webber says, they move like an inverted swinging pendulum, with the body essentially pivoting above the point where the foot meets the ground below. As we take a step, the center of pressure slides across the length of the foot, from heel to toe, with the true pivot point for the inverted pendulum occurring midfoot and effectively several centimeters below the ground. This, in essence, extends the length of our "virtual legs" below the ground, making them longer than our true physical legs.

As Webber explains: "Humans land on their heel and push off on their toes. You land at one point, and then you push off from another point eight to 10 inches away from where you started. If you connect those points to make a pivot point, it happens underneath the ground, basically, and you end up with a new kind of limb length that you can understand. Mechanically, it's like we have a much longer leg than you would expect."

Webber and his adviser and co-author, UA anthropologist David Raichlen, came to the conclusion after monitoring study participants on a treadmill in the University's Evolutionary Biomechanics Lab. They looked at the differences between those asked to walk normally and those asked to walk toe-first. They found that toe-first walkers moved slower and had to work 10 percent harder than those walking with a conventional stride, and that conventional walkers' limbs were, in essence, 15 centimeters longer than toe-first walkers.

"The extra 'virtual limb' length is longer than if we had just had them stand on their toes, so it seems humans have found a novel way of increasing our limb length and becoming more efficient walkers than just standing on our toes," Webber said. "It still all comes down to limb length, but there's more to it than how far our hip is from the ground. Our feet play an important role, and that's often something that's been overlooked."

It's no wonder humans are so set in our ways when it comes to walking heel-first — we've been doing it for a long time. Scientists know from footprints found preserved in volcanic ash in Latoli, Tanzania, that ancient hominins practiced heel-to-toe walking as early as 3.6 million years ago.

Our feet have changed over the years, however. Early bipeds (animals that walk on two feet) appear to have had rigid feet that were proportionally much longer than ours today — about 70 percent the length of their femur, compared to 54 percent in modern humans. This likely helped them to be very fast and efficient walkers. While modern humans held on to the heel-first style of walking, Webber suggests our toes and feet may have gotten shorter, proportionally, as we became better runners in order to pursue prey.

"When you're running, if you have a really long foot and you need to push off really hard way out at the end of your foot, that adds a lot of torque and bending," Webber said. "So the idea is that as we shifted into running activities, our feet started to shrink because it maybe it wasn't as important to be super-fast walkers. Maybe it became important to be really good runners."